I have three long overdue Five in a Row "rows" to share in the upcoming weeks, starting with Paul Revere's Ride. This poem has such a wonderful cadence to it - it is just sheer fun to read aloud, yes even several days in a row! And I love this picture book version with it's lovely illustrations. It really brought the whole story to life for us. 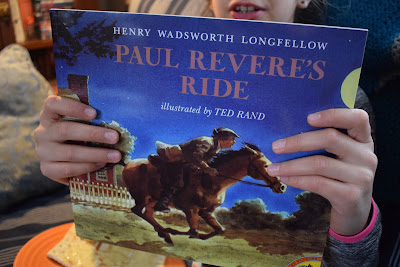 I grew up in New England and my kids are growing up in New England, so reading about early American history is always pretty exciting for us. By a happy accident we rowed this book right around the anniversary of Paul Revere's ride!

Listen my children and you shall hear/Of the midnight ride of Paul Revere.


My next FIAR post will feature our row of The Finest Horse in Town. Thanks for visiting!
Posted by Kim at Monday, July 03, 2017