Reviewing a Game: Spot It!

I have been working on tweaking my summer car bag this week. I already had most of what I needed, but I added a snazzy new picnic blanket I found at Target and a few new games. One day, when we had time in between one kid's practice and another, I told the kids that instead of running yet another errand we were going to go the park, set the blanket down in the shade, and play a game. They were thrilled, and we decided to make games-on-a-blanket a regular thing.

I have been feeling a little bummed that summer has been going by at warp speed and my kids are so busy with practices, camps, and other things that there isn't much time for the lake or the pool. But games outside feels summery too, and it is actually do-able with our crazy schedule.

This week we are playing a new to us game - Spot It!, which I purchased earlier this summer.  I love that it is inexpensive, versatile, and easy to transport.

Look at the cute little tin it comes in! All the cards (55 of them) and directions fit right inside. Round cards, how cool is that? 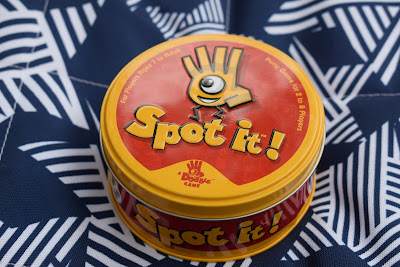 There are many variations of this game, which makes it fun. They all involve matching a shape on your card to another card as quickly as you can. The shapes are the same color, but not the same size. This is deceptively difficult! We only tried the first three variations but we're looking forward to trying the rest. In the first variation, called The Tower, everyone starts with one card. You put the rest of the cards in the center for a draw pile. 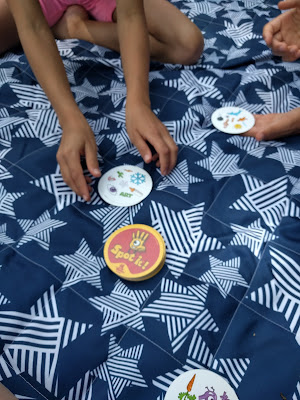 Then you flip over the top card in the draw pile. 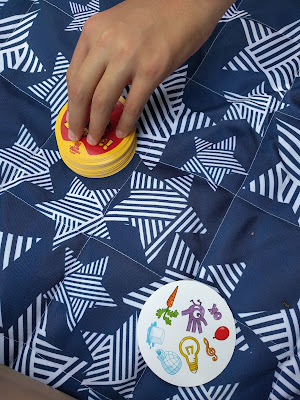 And try to match a shape on it to a shape on your own card, before someone else does. 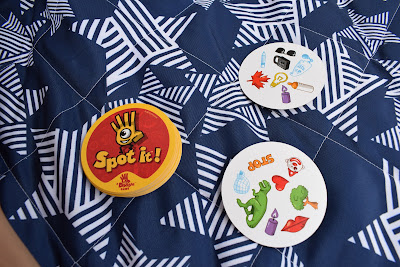 In this case you would want to yell "candle!", because both your card and the draw pile card have a purple candle. If you call out your card first, you keep the card from the draw pile. This game really makes your brain work! Whoever gets the most cards wins. 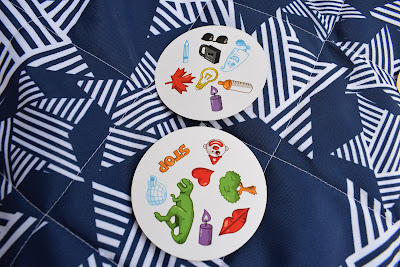 Spot It! is an awesome brain training game, helping to build visual skills, attention span, and memory. The manufacturer calls it "a game of visual perception" Younger kids would also learn some vocabulary and simple reading skills from this game. It is one of those rare games that really feels perfect for all ages. And age isn't necessarily an advantage either....I lost every time the first day I played against my kids. And I was trying! 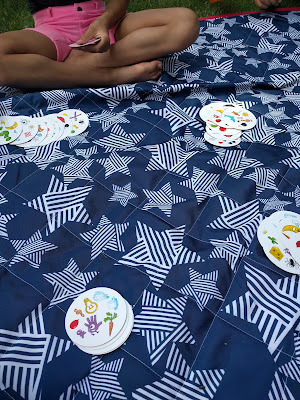 There are a total of five game variations in Spot It! We also played The Well, in which one card is placed in the middle of the blanket and all other cards are dealt out. Each player flips their cards right side up in front of them. 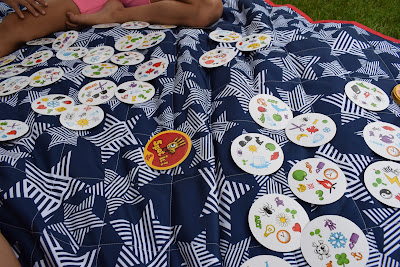 When the center card gets flipped up everybody tries to match one of the shapes on any of their cards to the card in "the well". This gets a bit frenetic! The matched cards get placed on top of the center card, and the object is to get rid of your cards first. 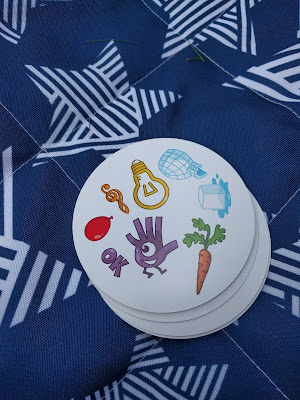 We haven't played the other three variations,  like The Hot Potato and The Poisoned Gift yet. My kiddos liked the first two variations so much we haven't yet made it to the rest. But I am sure we will. I played this game once with four people and once with two, and lower numbers of people definitely make it easier.

That was fun! I noticed they also have a camping version of Spot It! which is now on my wish list.
Posted by Kim at Thursday, July 13, 2017