Rose just finished up Writing Strands Level 2, so I thought I'd write a little review. I've tried a few different writing programs over the years, but I've had trouble finding something that sticks. This year I put everyone in Writing Strands, and it is the best fit for us so far. I'm going to talk about Level Two here, but I also have kids working through Level Three and Level Five. 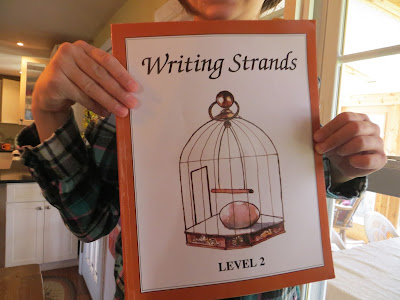 Writing Strands Level Two consists of 15 writing assignments. It is  meant to be a full year of writing instruction, and that is about how long it will take us to complete the book - just shy of a full school year. The general idea is that the student spends a week on each assignment, then takes a week off from writing. We sometimes took a week off between assignments and sometimes not, depending on how long the assignment took (sometimes they took longer than a week) and how arduous they were (sometimes she needed the break, sometimes not). On average, we worked on a Writing Strands assignment three days per week, for about 15-20 minutes at a time.

The book is divided into 15 lessons, which are further divided into writing assignments. Day 1 is devoted to "pre-writing" - discussing ideas, introducing punctuation, learning to describe objects, and other mostly verbal activities.

To give you an idea of what a lesson is like,  I'll describe Lesson 3 "Like a Reporter".

On Day One -"Prewriting" - We talked a bit about what reporters did, and I explained to her what would happen the next day...as suggested in the book, her brother would come in the door, do a good deed or two of his choosing while she watched, then leave. She was to watch carefully and be ready to tell me exactly what he did.

On Day Two, her brother (very kindly) came into the kitchen, polished a bowl of apples, and exited through the front door.  I had Rose narrate the events back to me. Instead of just saying "Christopher came in and polished the apples", she was to say that he came in through the front door, shut the door behind him, walked over to the sink, got a paper towel, came back to the table, picked up an apple, polished it, etc. This was very good practice in paying attention to detail! I wrote her list of events down for her.

Days Three and Four were set aside for writing up a "Good Deed Report". She was to turn those notes into full sentences and write them down. Since Rose is new to writing and spelling, I sat with her and we worked on just two sentences each day. This assignment took longer than one week to finish, but I prefer to go slowly to avoid frustrating her with too much writing at once.

There is a nice variety of assignments in this level, and there is really no "typical" lesson.  She wrote a short paper about her morning routine, an advertisement for a product (which turned into a little skit), an interview with our puppy, and short verses for greeting cards, among other things. We did every assignment in the book except the last one, which is to pretend that summer is over and then write down what you did. She thought it would be better to wait until summer was actually over, and write down what she really did. So we'll start next year with that assignment.

I love Writing Strands. It is super easy to use, very inexpensive, and completely re-usable, since all work is done on separate paper.  I like that it breaks the assignments down into manageable pieces. We often tweaked the assignments a bit to suit Rose's interest, which is easy to do with this program. For example, she just completed Lesson 14: "Animals", where she was asked to pretend to be a favorite animal and write about what she might do. That didn't interest her too much, so I suggested she just write about her favorite animal. We used the ideas in the lesson to come up with a list of characteristics, then she wrote a little nonfiction report about her favorite animals - horses!

There isn't a teacher's manual per se with this series - the single book Evaluating Writing is meant to go along with all of the levels.  I do have EW, but haven't used it much yet. It is on my to-do list to look it over, and hopefully I'll be able to review it separately later on.

I don't think Writing Strands needs any supplementation, but I do like to have the kids practice narration and dictation, so Rose is also using Writing with Ease Level Two.