Last week I thought I would try making borax snowflakes with the kids for a fun project. This is something I have wanted to try for quite awhile. The directions made it all look very easy and quick, so I decided this would be my contribution to our 12th Night fun. 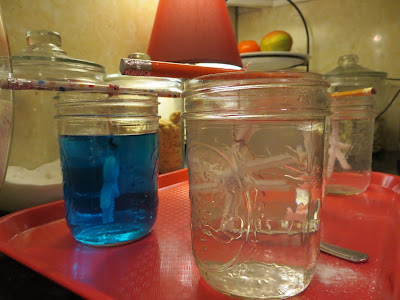 This is how we did it:


We were supposed to have beautifully crystallized snowflakes the  next morning, according to the directions, so I was pretty excited to get up and take a peek. But what did happen was...pretty much nothing. In fact, it was only this morning - five days later - that crystals are beginning to form on our snowflakes.

I did a little internet sleuthing and found this site, which says it can take two weeks to form good crystals. The same site recommends making a super-saturated solution by mixing in borax until no more will dissolve. We did not do that, and if we try it again (which we will, if this doesn't work!), we will do it that way.

I'll let you know how this little experiment works out and post a photo once we have something going on.