A Review of BookShark's American History 1

James and I are finishing up our last read-aloud for BookShark's American History 1: Swift Rivers. BookShark puts grade levels on all of their packages, which I don't care for because I always feel like my kids are behind somehow.  American History 1 is called "third grade", but they recommend it for ages 8-11. For the record, James was in fourth grade (9-10 years old) when we did this, and for the most part, I think the reading level was great for him. The read-alouds were just right challenge-wise; he certainly had to pay attention while I was reading, but he usually understood what was going on and could discuss it.  Some of the readers were a bit on the easy side, which I initially saw as a negative, but then decided not to worry about. James had no trouble keeping up with the reading assignments, which meant that I didn't have to nag him, and that is always a plus! And after all, it is nice to read an easy book after a more challenging one. I like to do that too.

As I said earlier,  I chose the advanced reader package to go along with this level. The advanced readers are not harder.... there are just more of them. The advanced reader package includes the regular readers, plus eight more books.  Many of the readers were very easy. In fact, James read several of the shortest ones, like Stone Fox and Sarah, Plain and Tall, in just one day. I did not read the books myself, but the notes in the instructor's guide were sufficient to help me discuss each day's reading with him. Many of the readers are classic historical fiction like The Bears on Hemlock Mountain, The Corn Grows Ripe, and The Matchlock Gun. There are also a fair number of biographies at this level, such as The Story of Eli Whitney and Meet Thomas Jefferson. James really prefers nonfiction right now, so I appreciated that there was plenty of that  mixed in this year. On average, it probably took James 20 minutes a day to complete his reading assignment. 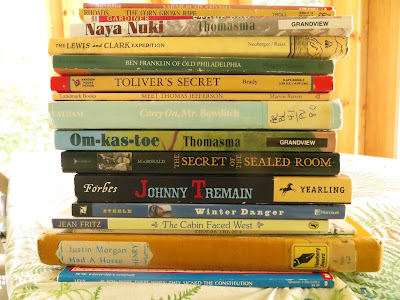 The eleven read-alouds for this year are mostly historical fiction. There is also a poetry book, A Child's Introduction to Poetry, scheduled once per week. I reviewed the poetry book earlier this year and you can see the whole list of read-alouds on the BookShark website. I enjoyed all of the read-alouds and appreciated that there was a good mix of writing styles and topics. Rose (6 at the time) wanted to listen to all of them, so I think a child on the younger end of the recommended age range would probably do fine with them, depending on their patience. On average, we spent 20 minutes on our read-aloud each day.   Johnny Tremain and Carry on Mr. Bowditch are long books that definitely challenged James in his listening abilities. I needed to have a glass of water along for those readings! I will admit that I was not looking forward to re-reading either of those two books, since I had already read them with Grace and Christopher for Sonlight's Core D. I had memories of them taking approximately six years to finish and the kids being just a wee bit bored. But I did read them aloud and was pleasantly surprised to find that I actually enjoyed both books much more the second time around. And while James never exactly begged me to read more, he had much more patience than I remember his brother having for our read-aloud sessions. I wonder if that has anything to do with his years of listening to his older siblings' Sonlight read-alouds?

Secrets of the Sealed Room was a really fun read, and we both enjoyed trying to figure out the mystery. We were totally wrong, for the record! I enjoyed The Witch of Blackbird Pond, but it wasn't such a hit with James. I think it may have been a bit too girly for him, with a little too much romance and talk of marriage to hold his interest.  He preferred Winter Danger, Sign of the Beaver, and Toliver's Secret, which all have a lot of action and adventure.  I think the age range for this set of read-alouds (8-11) is right on target, with the possible exception of Carry On, Mr. Bowditch. I think that one is better suited to the upper end of the age range, because the story is a bit harder to follow and there is a lot of scientific terminology in it. I definitely appreciated the vocabulary notes in the IG for that one! For sensitive kids, you might want to preview Walk the World's Rim, because there is a death in it that may be upsetting. James was fine with it, but I did wait to read that section until Rose was out of the room, because she does get bothered by such things. There are quite a few deaths in Bowditch as well (that guy had a hard life!), but I warned James about it ahead of time and he was fine with it, as was Rose, who listened in off and on.

There are three main history spines for this year: The Landmark History Volume 1, The Children's Encyclopedia of American History, and The Beginner's American History.  Each day we were assigned  a reading from one of the spines or one of the supplementary history books.

Landmark  was recently updated and now has plenty of full-color pictures and a much more readable text.  I already owned an older Sonlight Core D, but I purchased BookShark American History so that I could use the new Landmark. The reading assignments are generally just a few pages, but I do think the text might be a bit difficult for an eight- year old. I thought James was the perfect age for it.

The Children's Encyclopedia of American History is your typical DK encyclopedia: heavily illustrated with both small snippets and full paragraphs of text. I had originally planned for James to do the DK readings independently, but I found that he he got much more out of the readings when we did them together. I loved  the reproductions of historical paintings scattered throughout the book;  it was like a mini art history lesson along with our reading. The back of the book was a good source for memory work ideas for us this year. It includes the list of American presidents and the text of the Declaration of Independence, among other things.

The Beginner's American History seems like it was designed for a public school setting since the last few pages of each section are devoted to comprehension questions. We skipped those questions and just did the questions from the IG, which were often the same anyway. The readings from this book are short, with a casual, narrative style. We often combined two days' readings into one day. This is the easiest of the three spines, as far as reading level goes. The readings focus primarily on specific people, rather than just historical events, so it is a nice complement to the other two books.

In addition to these three spines, we read If You Were There When They Signed the Constitution, Pedro's Journal (historical fiction in diary form, which I thought was a neat idea), a book about Lewis and Clark, and a picture book about North American Indians, which we didn't read, because I couldn't find it!

James kept a Timeline Book for this level, which I reviewed here. I do own the markable map and markers, but we never used them; we always did the map assignments with the smaller  maps included with the IG. We did not use the Language Arts for this level, so I can't review that.

Overall I think this is a great core, and I will definitely re-use it with Rose. James will be moving on to BookShark's American History 2 next year.
Posted by Kim at Monday, July 13, 2015