Grace really wanted to learn Greek this year. I was a little surprised and suitably impressed. I was also kind of at a loss, because I have enough trouble helping the kids with Latin (and by "helping", I mean looking at the answer key while pretending I know what I am talking about).  So the thought of "helping" someone with Greek when I don't even know the Greek alphabet was more than a bit daunting.  But she was willing to take it on as a totally independent subject, and since she already does Latin Alive and Rosetta Stone Spanish with zero help from me, I figured it couldn't certainly couldn't hurt to let her try.

I did a bit of sleuthing in homeschool catalogs and on forums and discovered that there aren't really all that many options out there for learning Greek, especially since she was set on learning Attic Greek, not Koine. She didn't feel quite ready for Athenaze, which seemed like the top high-school level recommendation, but she did like the look of Galore Park's An Introduction to Classical Greek, so I ordered her the workbook and answer key.

Before starting with GP, I had her go through Greek Alphabet Code Cracker, which many people said was THE way to learn the Greek alphabet. This is an awesome book to help you get started on your Greek study! 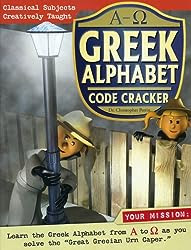 But I'm going to save a review of that for another post. It took Grace about a month to complete Code Cracker, then she moved on to GP. She did okay at first, but the last couple of months she has been really struggling and just not getting it.  She is going at a really slow pace, since Latin and Spanish are her primary foreign languages, but even so it has been hard for her to master things. She made it up to chapter four before deciding to throw in the towel.

Here are some of her thoughts on GP Greek, which I jotted down and paraphrased here:

"I don't think this program is good for visual learners. I like to have an audio component so I can hear the pronunciations. I also like to have things to memorize, like chants (her Latin program is big on chants as a memory aid). I also do better if there are games or other reinforcement activities to do (Latin Alive has an awesome go-along website that really helps the kids with vocab). I would also like to see more charts or other visual aids to help in reviewing things and showing the big picture. There is not enough work with definite articles and endings; I have a lot of trouble with these. There is just not enough review in general and the book moves too quickly. Too much vocabulary is introduced in each chapter and there is not enough grammar discussion."

In short, she is having trouble retaining and understanding and her concerns seem perfectly valid to me. I think with languages you really need that interactive component, at least to some degree. Latin Alive has  DVD's, CD's, and an interactive website, and Rosetta Stone is computer-based....doing a foreign language that is purely book-based is difficult at best.  Greek is obviously not the easiest subject out there and I am not the most useful Greek-teaching mother out there! So it may be that she will struggle with any program, but this one is clearly not working.

After much debate, she decided to try out Athenaze after all. There are at least a few online helps for Athenaze and the text looks much more comprehensive. I think it will be a better experience for her.  She likely won't start this until the end of May, but when she does, I will put together a post with links to the online helps she will be using.
Posted by Kim at Wednesday, April 29, 2015