We are really in the thick of our Christmas celebrating now and it is so nice. Friday was our last "official" day of school till after New Year's, though I do want to finish reading The Golden Goblet since we are so close to the end. We made painted and glittered feather ornaments to decorate the little tree we keep out on the sun-porch. The feathers are from our chickens. Rose likes to collect pretty feathers she finds around the yard, and this was a great use for them.  Simple and fancy, at the same time. 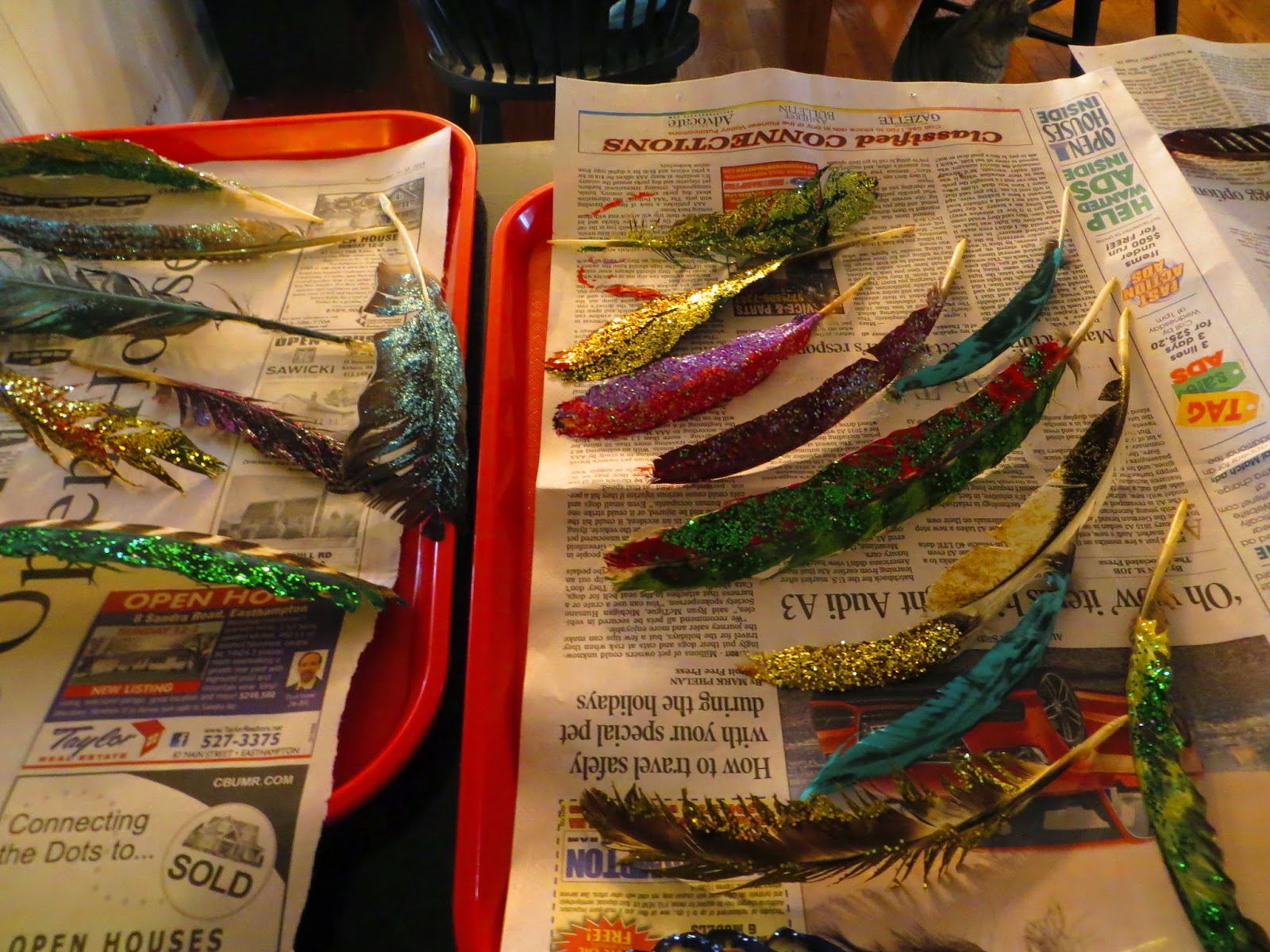 We also made salt dough ornaments, using this recipe exactly and they came out great. 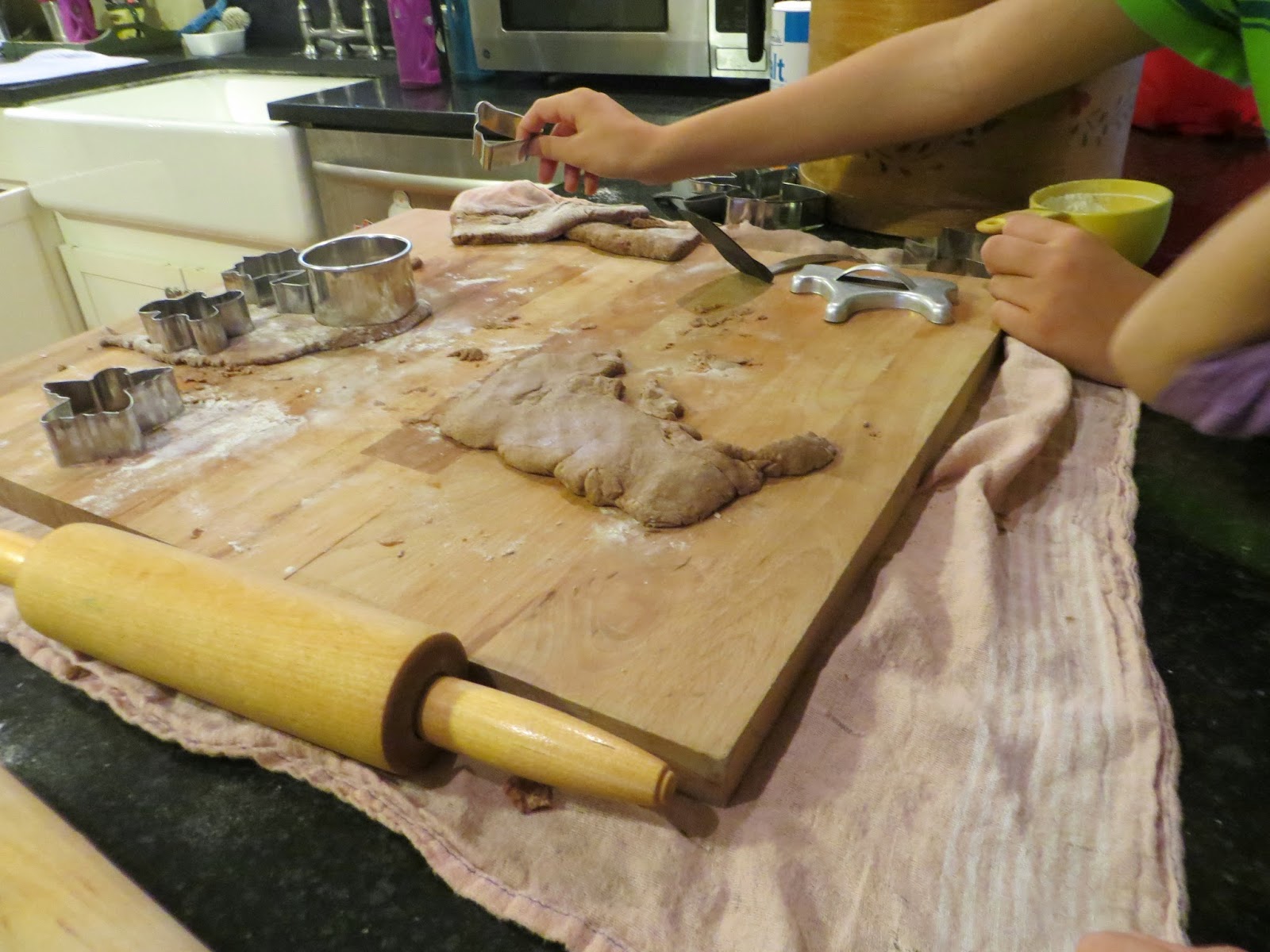 We used the cinnamon as suggested, and the kids painted them. The cinnamon does make the dough quite brown, but it also  makes them smell great. This recipe makes a lot of ornaments, and making, baking, and painting them stretched over two days.  This is one of Rose's angels.... 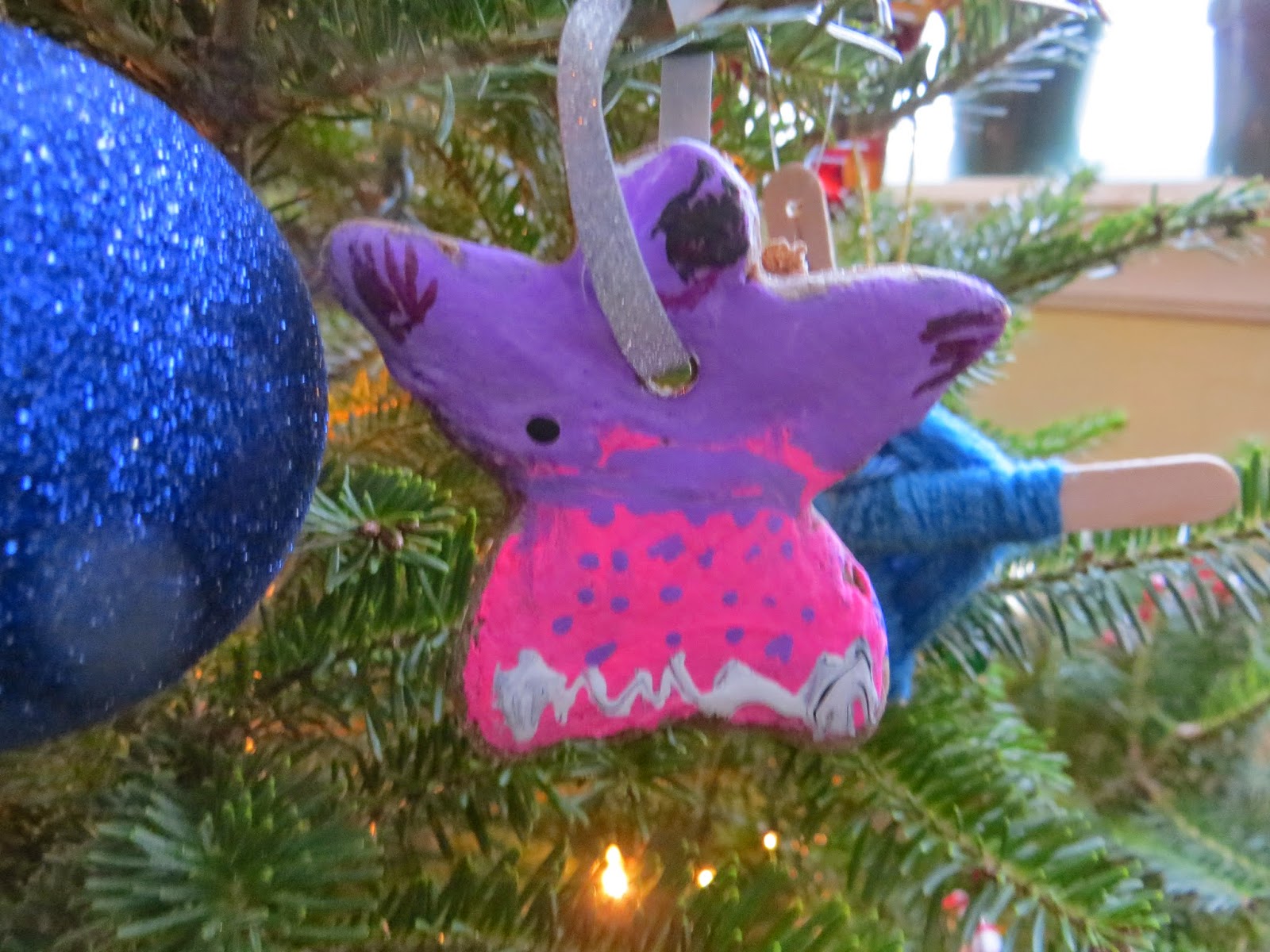 And here is a wreath by Grace peeking out from behind a wooden moose ornament that Christopher painted. I found the little wood ornaments for just over a dollar at the craft store and the kids each painted one. 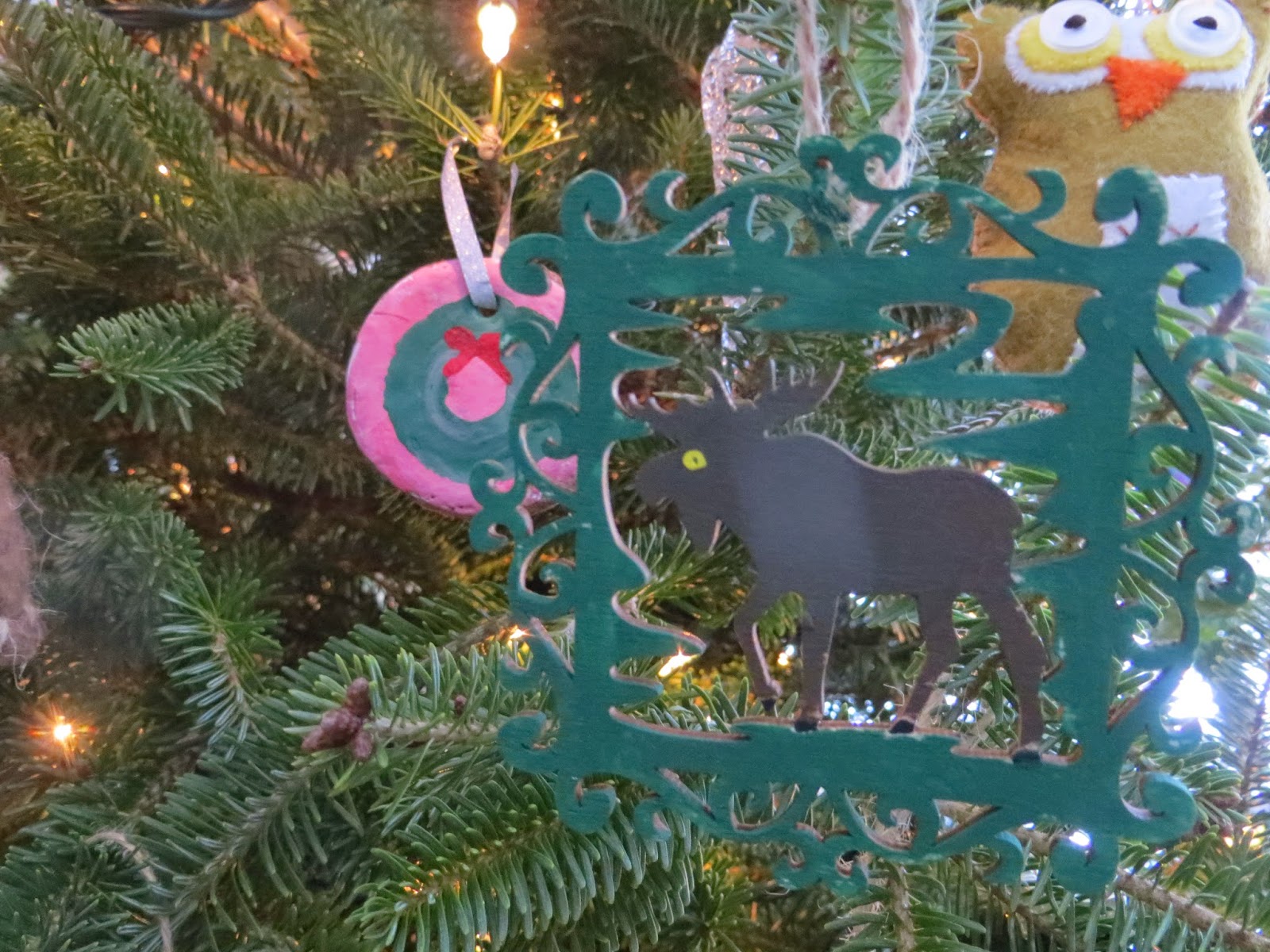 I have seen more bluebirds around the yard the last few weeks than I have seen all summer. Bluebirds in the snow are so pretty. 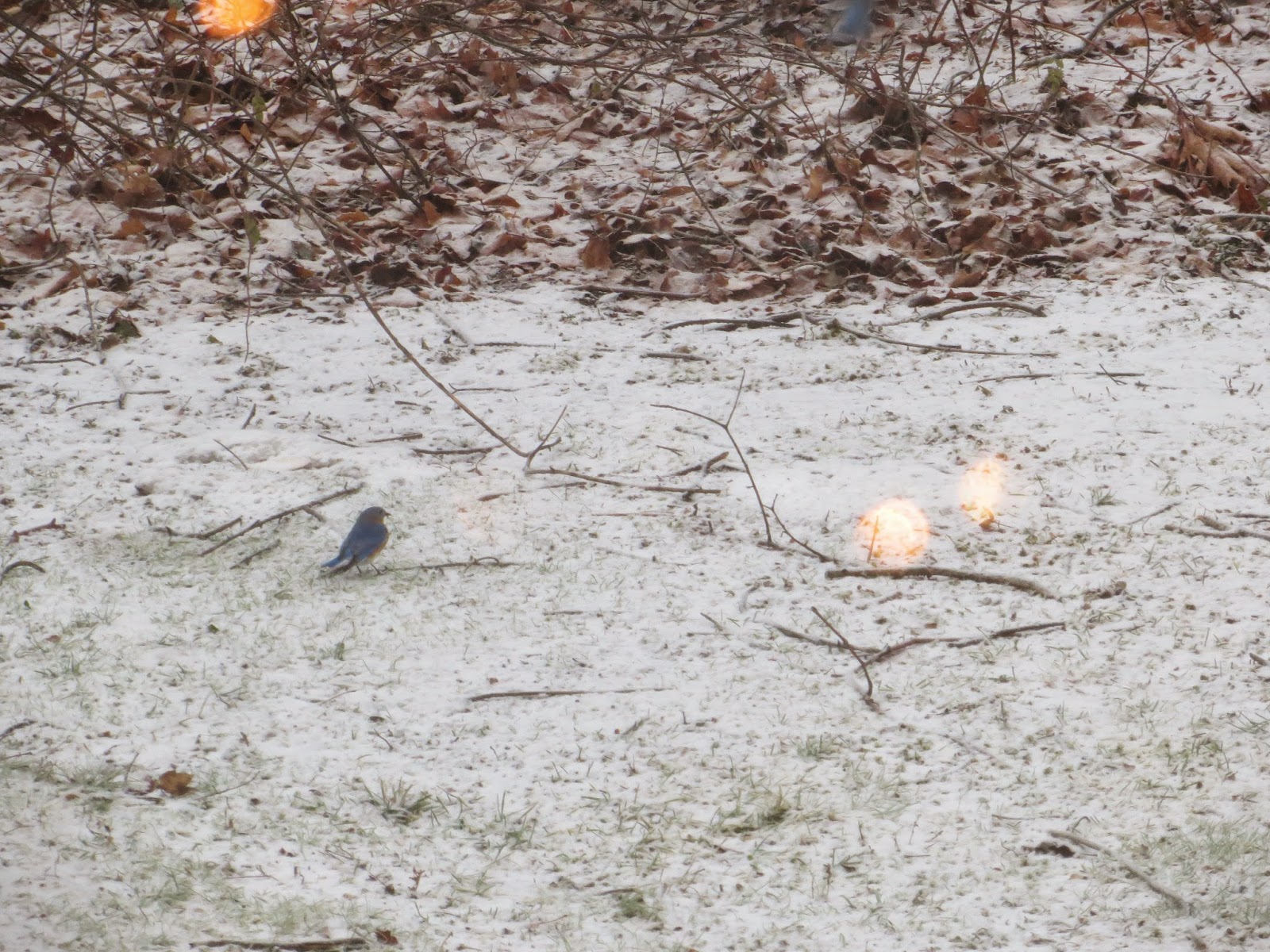 Our amaryllis have started to bloom. We have two pink ones and two red ones and they are obligingly blooming in stages, so we should have at least one in flower from now until Christmas. 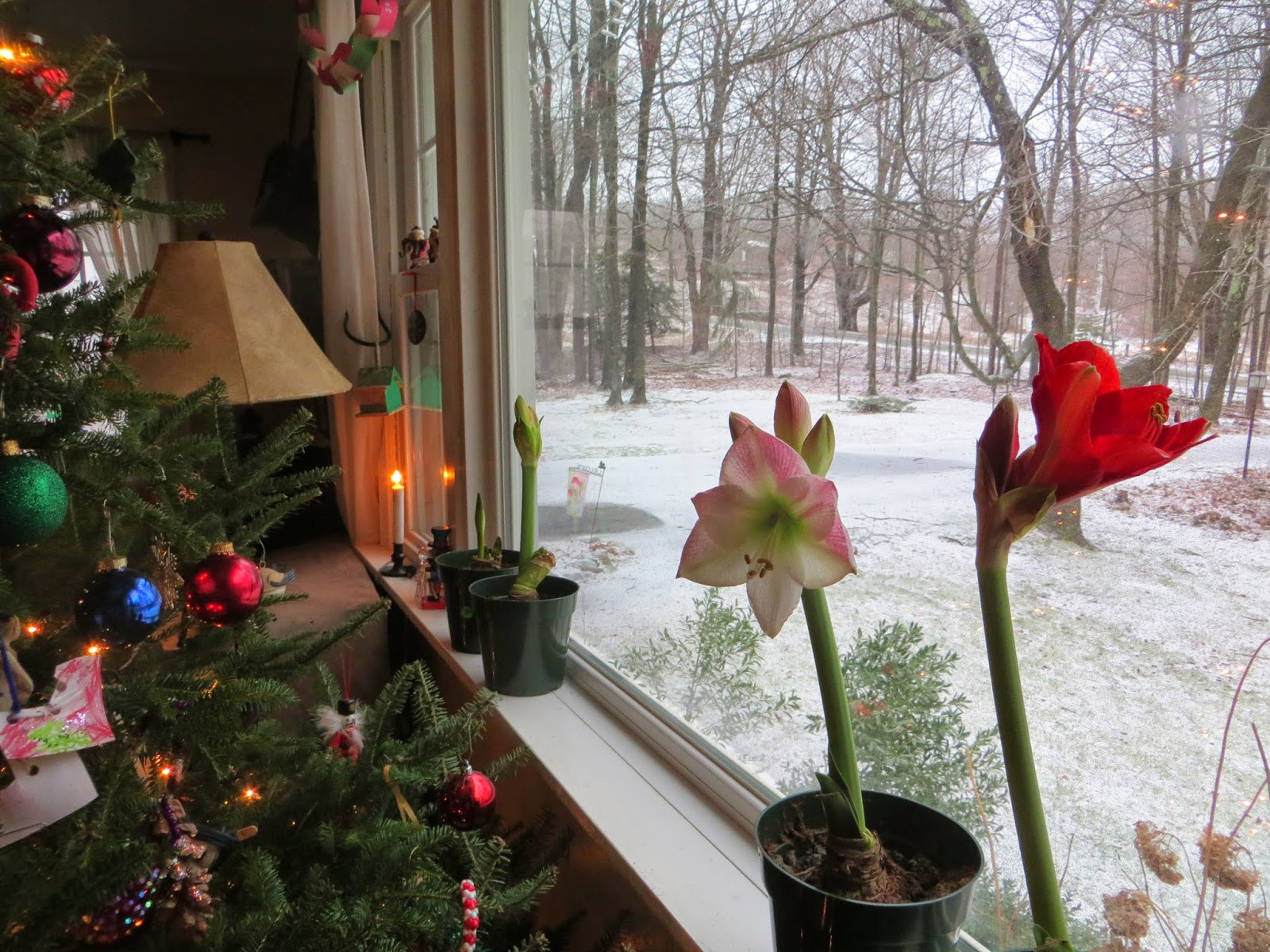 One or two of our chickens have decided to lay a few eggs this winter! This is a very nice surprise since we have not had any of our own chicken eggs since sometime in October. Our chickens normally do not lay once the days get shorter and we don't provide artificial lighting to trick them into laying. I suspect the winter layers are our new-ish Jersey Giant chickens, which were advertised in the catalog as being decent winter layers. Here's hoping! 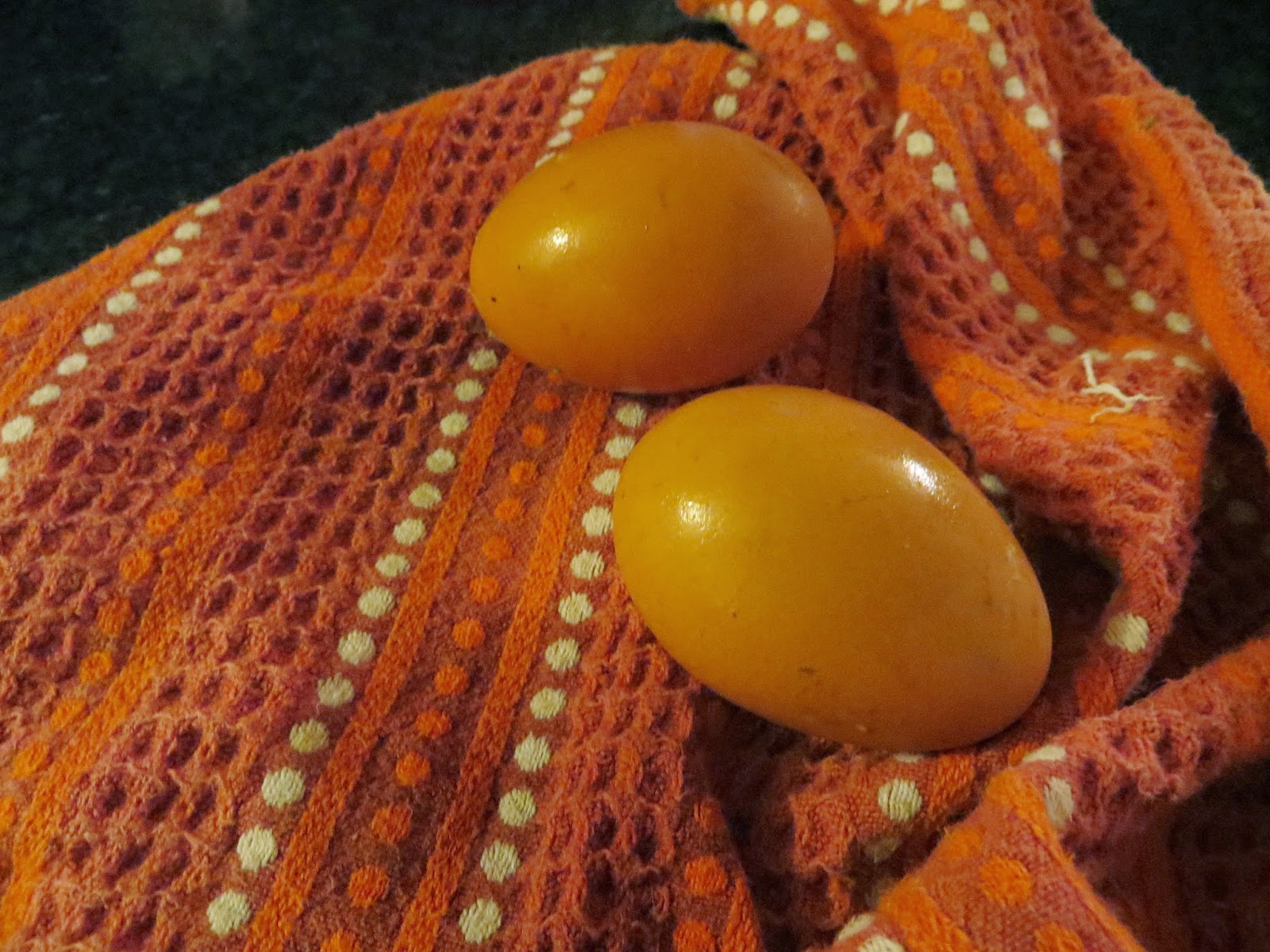 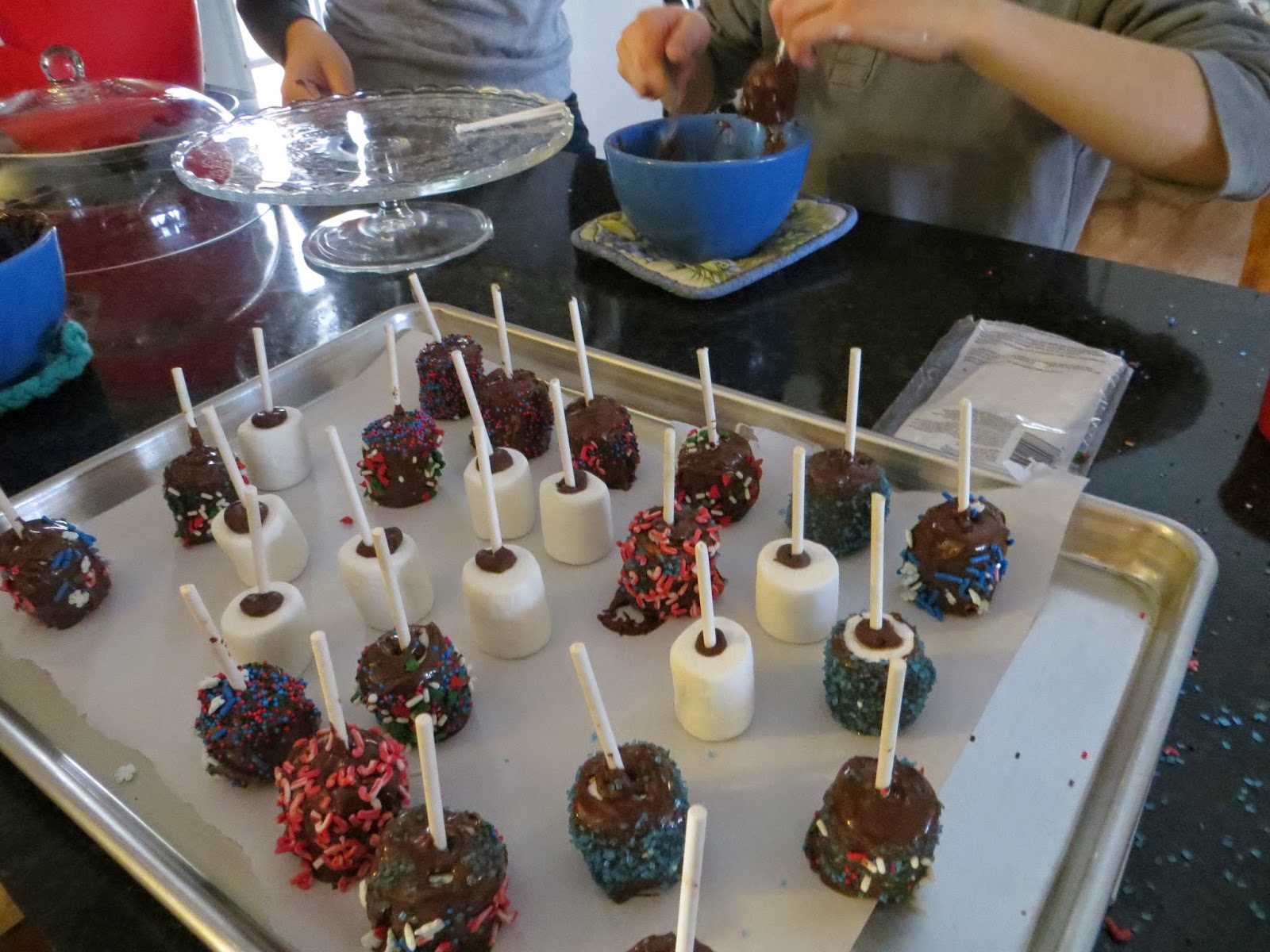 And of course, there was extra celebrating this weekend because Grace turned 14! There was a lunch out, a nice family party, a trip to the car-wash (hey it was warmish out and she is a good sport), a special dinner (she requested Indian food), lots of games played and fun snacks eaten, an awesome chocolate cake, a late night movie, and tons of fun books received as gifts. She will have lots to read over her break, that's for sure! 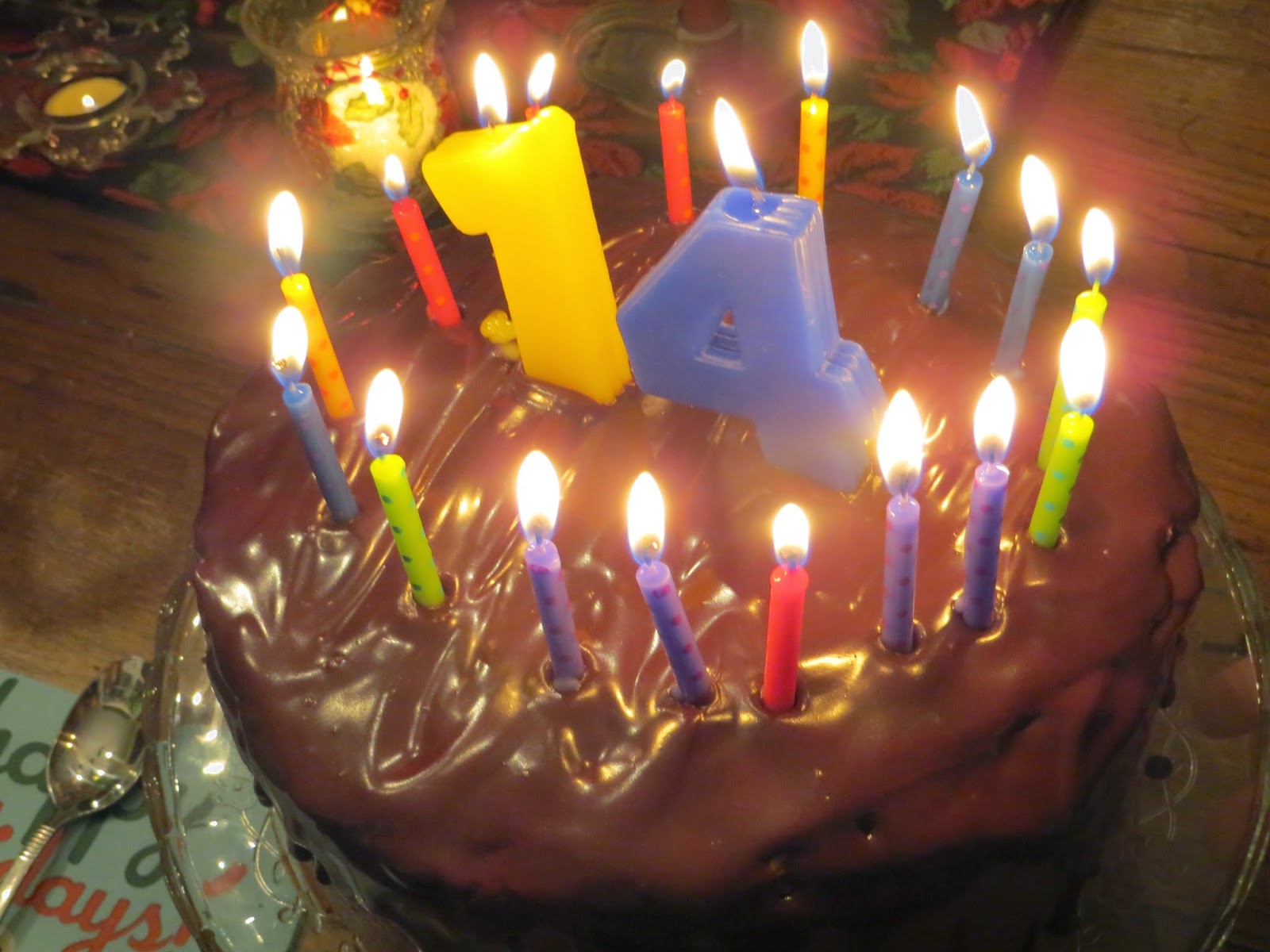 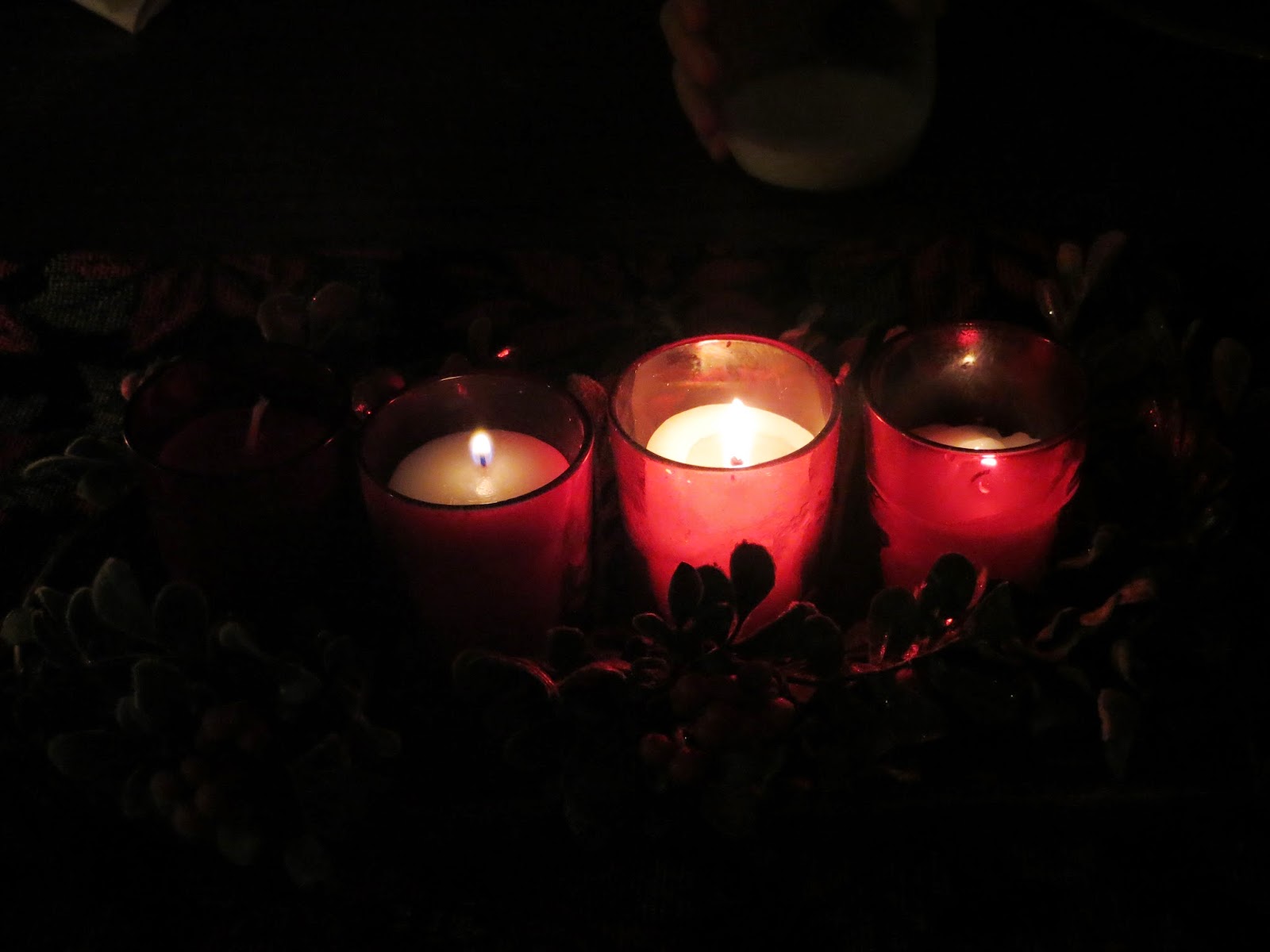 Now if time could slow down just a wee bit for the next couple of weeks, that would be great.
Posted by Kim at Monday, December 15, 2014