Christopher (11) has been using Teaching Textbooks 5 this year. He has completed a little over 50 lessons, so I thought it might be a good time to share a few thoughts about the program. For background: He came to TT from Math Mammoth, and before that Saxon. Saxon just about bored him to tears and caused a lot of frustration, as did Math Mammoth. He is not as "mathy" as his older sister and younger brother (they did just fine with MM). He is also easily frustrated and has a lot of trouble focusing. With MM, I had to sit with him for the whole lesson and talk him through every.single.step..... and even then there was so much whining, complaining, pencil throwing, stomping, etc..well, math was getting very, very frustrating and painful for both of us. A friend going through something similar suggested we give TT a try, and after a bit of hesitiaion about the price tag, we did! 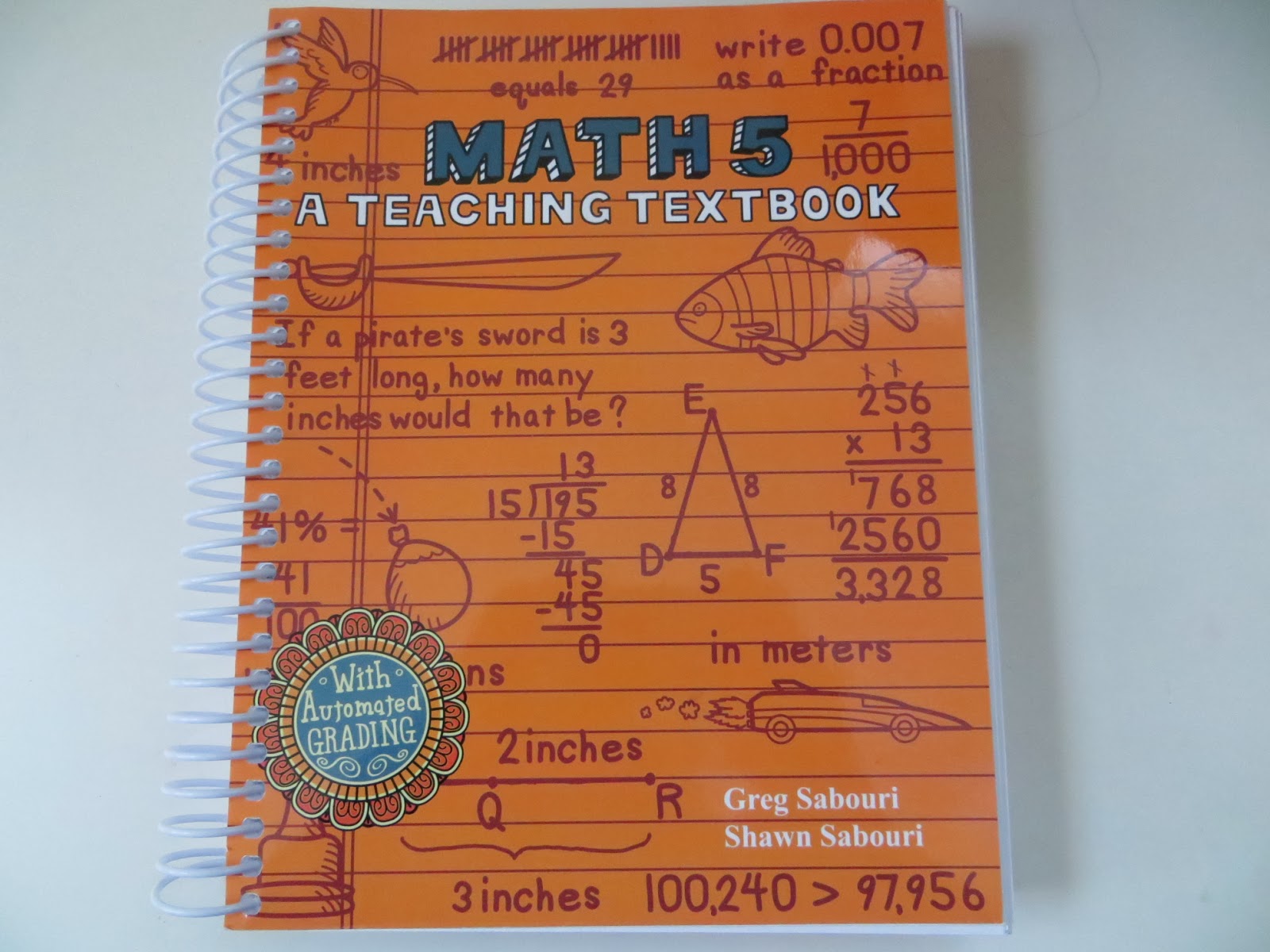 Okay, so here's a little overview.

Our TT package consists of the workbook, answer guide, and several CD's that contain the lectures.  The fact that the whole thing is on the computer is what drew me to TT in the first place, though I don't usually gravitate to computer-based programs. Teaching math is not my strong point, and listening to me try to teach it is not Christopher's strong point. The idea that someone else could explain things to him and that he could answer many of the questions without putting pencil to paper....well, it sounded like just what we needed.

TT5 has 114 lessons, plus quizzes. Christopher typically does 1-2 lessons a day or whatever he can get to in 30 minutes or so. He listens to a lecture, does five practice problems, then completes the problem set, which consists of 20ish problems. All of this is done on the computer, with the answers being entered or clicked on. He can usually do quite a few of the problems mentally. I copy out any pencil and paper problems on a separate piece of paper- we don't write in the workbook. If he gets a problem wrong he can either listen to a hint or just try again. After a second wrong answer, he is given the option to view the solution.

I generally do not use the workbook for anything other than copying out a few problems. I probably could have done without it, but I do I like having a written account of the lecture and problems on hand, just in case I need an overview of what he is working on. 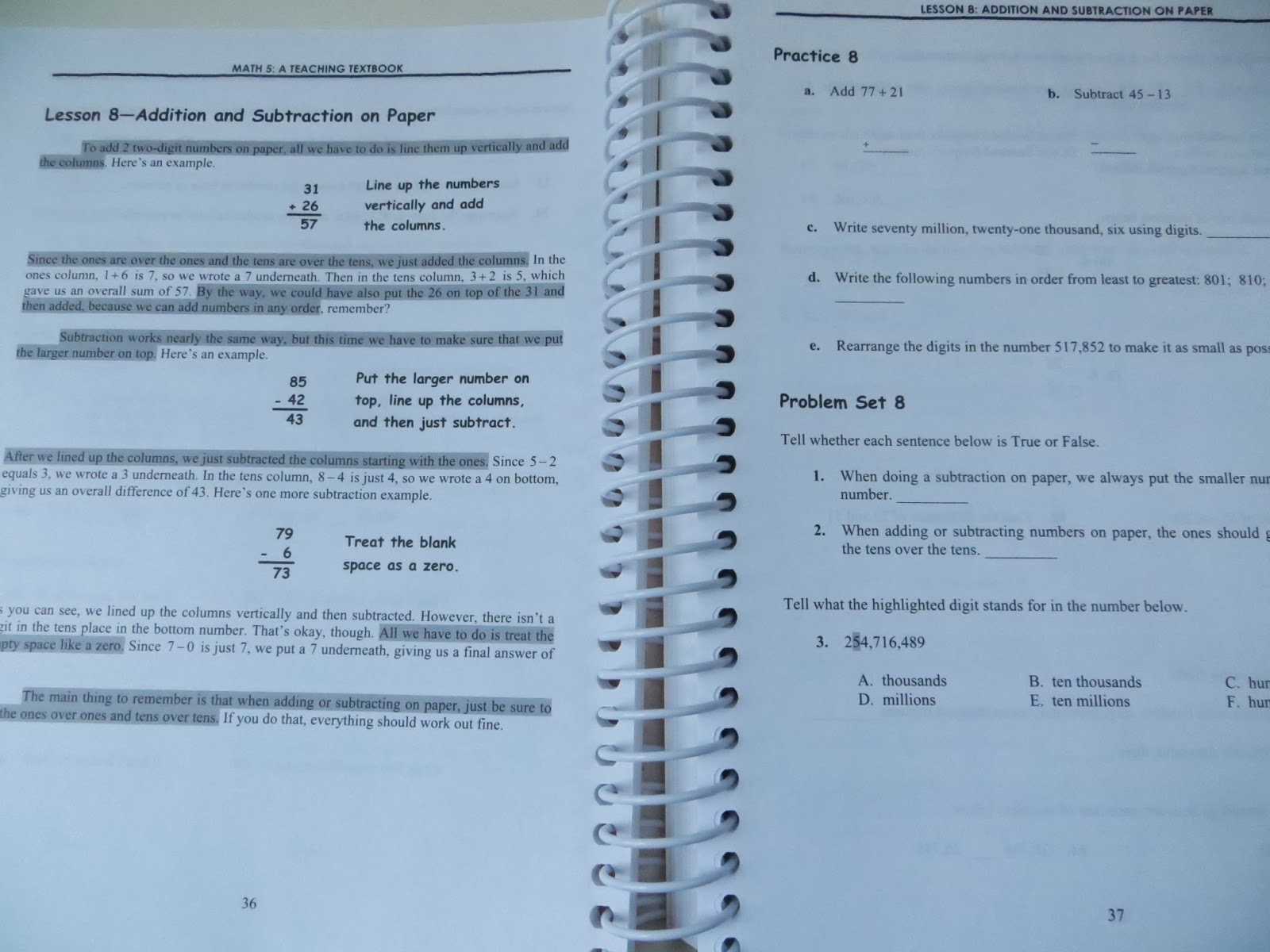 Now....for the best part of Teaching Textbooks....the automatic grading! One fewer set of math pages to look over every day! All I do is log into my teacher account on TT and I can immediately see how the lesson went....how many he got wrong, how many tries each problem took, and whether or not he viewed the solution. 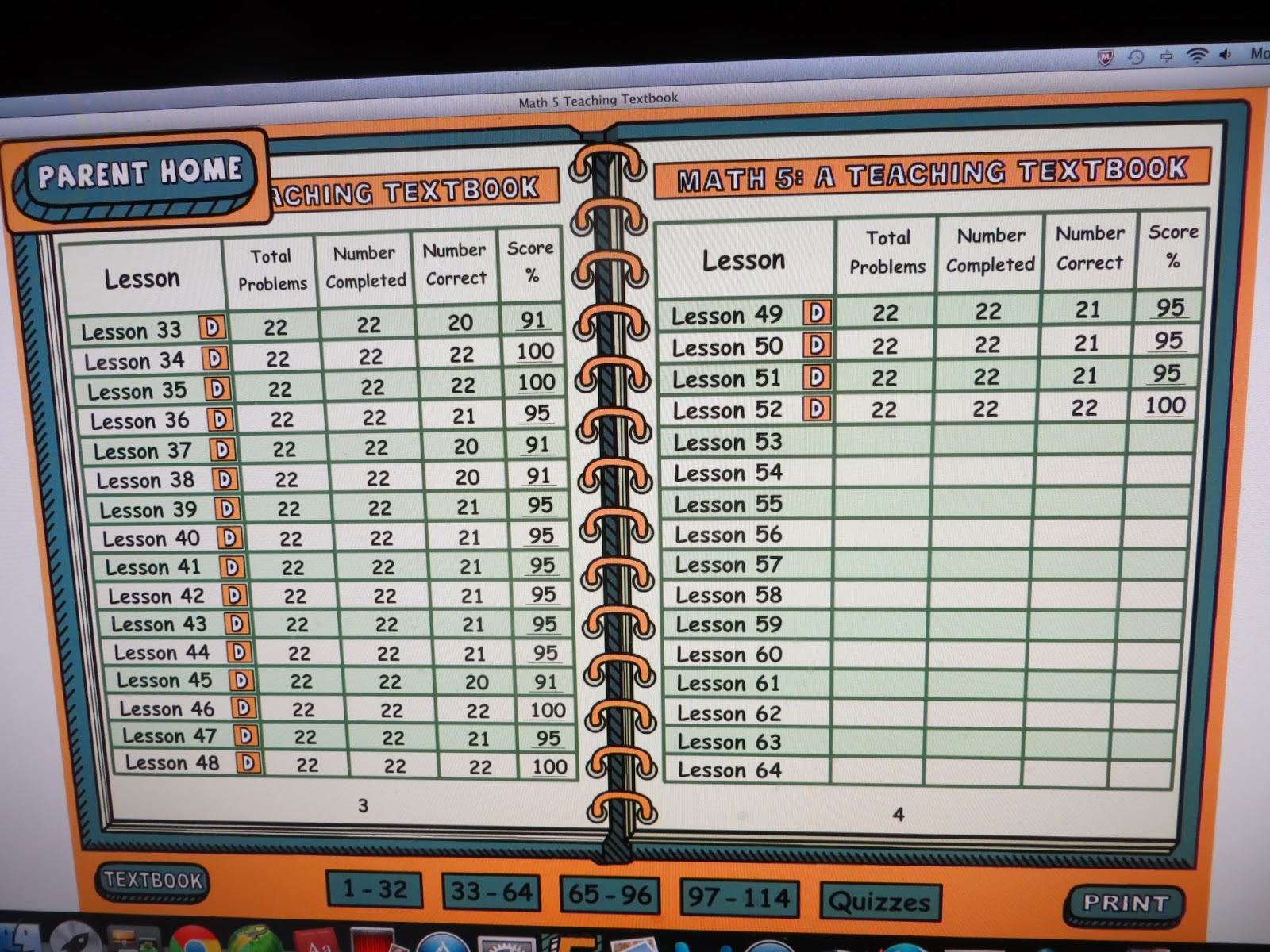 As far as negatives for TT...well, for him there are really none that I have found so far. He now does math willingly most days, and I hear only a very small fraction of the complaining I used to.

The only negative I see with TT in general is that it does seem to lag "behind" other math programs and it isn't quite as rigorous.  Last week, for example, he had a lesson on regrouping in subtraction which, as he pointed out to me, he had learned two years ago. I would not say this program is nearly as challenging as MM, Saxon, or Rightstart. But when I flip to the end of the book, I can see that he will be multiplying and dividing with decimals and that he will learn long division. So perhaps it is not too far behind. He did long division in MM4, but he never really got it. I think all of the review will be good for him and will help to boost his math confidence.

I would probably not recommend this program for a "mathy" kid, as it may not be challenging enough. Of course, I have only seen one level of the program! I have no plans right now to put Grace (13) into it. She is still doing well with Life of Fred. I also have no plans to switch James (8) to it, because he is strong in math and does fine with Math Mammoth (which is way cheaper!).

But for Christopher, this program has been a real blessing in our homeschool and has made our mornings much, much easier.  I would defnitely recommend TT to those kids that struggle with math or attention issues. Somehow that talking voice on the computer is easier to pay attention to than your own mother;).
Posted by Kim at Wednesday, February 26, 2014