We picked up speed a bit this week, but it was a short week due to visiting with family and the Fourth!

Here's what we did this week...

Rose and I started week 2 of P 4/5.  The reading topics and level are right on for her, but the selections tend to be shorter than she likes, so we read extra quite often. I was hesitant to do the Mother Goose rhymes, thinking she would find them babyish, but she loves hearing them so much that we read about ten of those a day instead of just the one assigned. We played several games of I Spy for things that start with the letter "F". Next up is the letter "B". She continued working on Singapore Essentials A and Get Ready for the Code. Her most favorite book is the Berenstain Bears Book of Science and Nature. We read a week's worth of reading assignments in a sitting when it's time for that book. We watched a bit of Mathtacular 1 (huge hit!). She also spent a lot of time practicing riding her "training wheeler".

James and I continued reading Castle Diary and he began reading Encyclopedia Brown to himself. He continues to read about knights and castles for history. Science this week was reading about birds from The Usborne Book of Knowledge. There was a suggestion to keep a bird log, but he had no interest. He did enjoy holding a beanbag on  his feet and trying to walk like a father penguin with an egg! 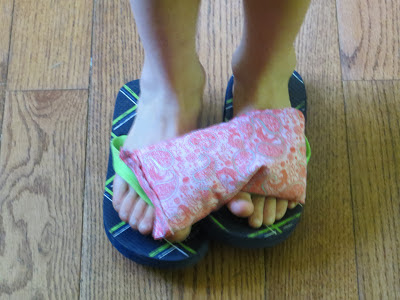 He began Lively Latin I this week. We are going very slowly with this. He likes playing the games on the LL site best. We also began MCP Word Study Plaid and Wordly Wise C. These are optional resources recommended by Sonlight.  They are both kind of busy-workish, but he likes that sort of thing. I streamline the writing for both and work on it with him so they take very little time. He was assigned to write poetry for language arts this week, but we skipped that because I could tell it was just not his thing. He did several pages of Math Mammoth 3, still focusing on addition and subtraction strategies. We also started reading How Artists See Feelings, which is a quick read-just two pages a week discussing a painting. He enjoyed it.

Still working on week 1, though Grace began week 2 today.  We continued to read Where the Mountain meets the Moon. I had been planning to have Grace read White Fang, but she was very resistant to it, so we dropped it. They read a bit from Best-Loved Folktales of the World and read more from the World Book Encyclopedia.  Grace really enjoys doing the Eastern Hemisphere pages for this Core. It is usually the first thing she chooses from her list to do. Christopher struggles with them a bit more, but we work through it. This week they read about communism and the people of China in order to fill out the pages. Both kids have been working on Rosetta Stone Spanish a couple of times a week, but we have yet to resume Getting Started With Spanish. They continued with Diary of an Early American Boy and started reading The Story of Inventions. We also began TOPScience Electricity. They were excited to get to watch "Science Guy" again and the experiment-figuring out how to make a light-bulb light up using a battery and a foil ribbon-went really well! 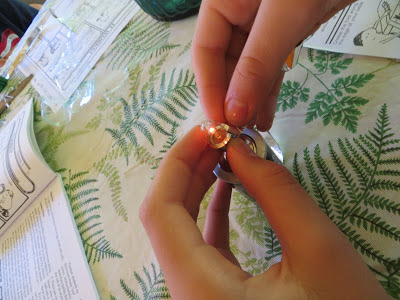 What else? Math was slow going. Lots of confusion on Christopher's part with the balancing scales section of MM4. Lots of frustration. But I think we have it now. Grace also had some confusion about scaling figures, to which my response was: "Ask your Dad when he gets home". I am afraid my math ability isn't what it should be! We started Grammar 5 and the kids actually seemed to enjoy it. I have decided to drop MCT entirely out of the equation for now. If it didn't work last year, I am not sure why I think I can make it work this year! I am going to have them do the Wordly Wise 3000 Book 5 that is scheduled with the Core. I was never big on teaching vocab as a separate subject, but lately I have noticed that Grace's vocabulary is a bit lacking. She is not the sort to puzzle out or look up a word-she just skips right over it.

We did picture study this week. Our current artist is Robert Rauschenberg. The kids get a kick out of trying to figure his work out, since he isn't a landscape or portrait artist like the other artists we have studied. His work is more like a photographic collage with all kinds of things hidden in it. 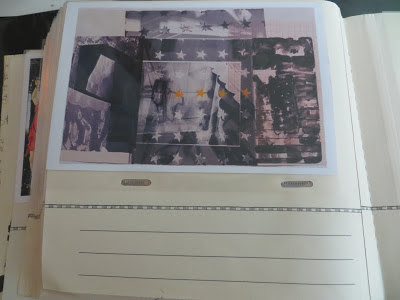 We took a trip to the zoo before our membership expired, and it was nice and quiet for a Sunday! 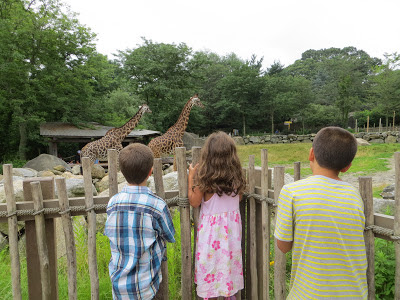 The kids got to see all their cousins, which was great. On the 4th we had our patriotic pancakes, a family cookout, and a trip to see fireworks. Grace tried making patriotic daisies. You just split the stem up vertically and put half in blue colored water, half in red. 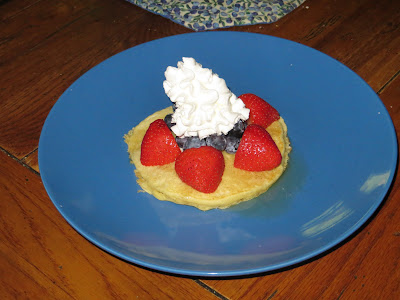 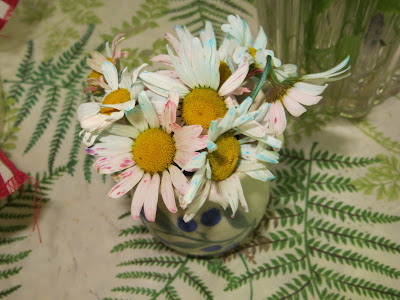 Rose tried fishing for the first time, coached by her big brother. She got quite discouraged when she didn't catch anything! And we went bowling with our free passes. Whew! 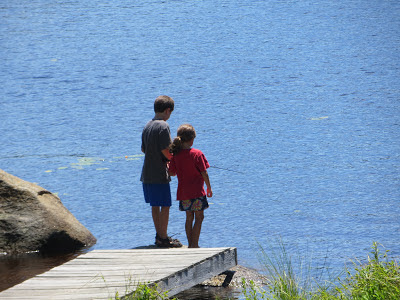 Next week Grace is off to camp so I will just have the boys and Rose during the day.
Hope you had a great week!