I wrote a post about year-round schooling last year, when I first considered moving to more of a year-round homeschooling schedule. This year (2012-2013), we started our lessons at the end of July and took time off sporadically throughout the year. The other day I posted about our plan to finish up at the end of June.

Things always seem to change, just when I think I have everything decided. First it was Memorial Day, which always feels like the start of summer to me. And the weather is going to be really, really nice the next few days. And I am really, really tired of homeschooling. So I started re- thinking. Which I naturally do every time I think I have decided on something! And I read a lot about homeschooling year-round and thought about some different options.

In the end, it comes down to these things:

Also, June is a really nice month around here. July/August can be very hot. Too hot.

So....I changed my mind. As of last week, we are finished with the 2012-2013 school year!! The kids finished their Oak Meadow levels...everything I wanted them to do anyways, and everyone except Grace is right on target with math. I would have liked her to get through a bit more, but such is life. I was going to have them finish their Latin, but really- does it matter if they start next year by finishing up this year's Latin??

However,  we will not be taking the whole summer off. We have tried that and it is nothing but a dismal failure. Lots of boredom and whining (both the kids and me) after a few weeks. We do better with routine. So I sat down and came up with a year-round homeschooling calendar for us. I am under no illusion that we will follow this perfectly! But, it is something to shoot for, and it lets us see when the next break is coming up.  I color-coded it: red for school days, blue for break weeks, yellow for catchup weeks which will be break weeks if not needed. It is posted on the side of the fridge, where I can easily console myself that a break is coming up:). 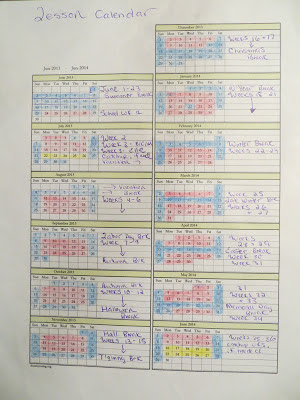 So as of this week we are on a three week break. After that we will start our 2013-2014 school year, but we're going to take a lot of breaks. And we are going to ease into a 3-4 weeks on/1 week off schedule. The kids are psyched about that. A week off a month!

I love the idea of having a whole week off every month to take care of other things- catch up on cleaning, do the photo albums, work in the garden, pre-read the kids' books, check papers, and whatever else needs doing. I have also heard of scheduling appointments for the week off and I like that idea too!

The kids will get their birthdays off, like always, and we will adjust the breaks around travel, the inevitable flu, or whatever else comes up. The plan is by no means set in stone! But it looks pretty good on paper:).