Our first weekly report in just about forever! We have had a good first week, though it went very, very slow. I can't say that all of the kids were excited to start up again, though everyone likes the idea of going year-round with more breaks. It does feel odd to be starting school in June when everyone else is winding down.  I was terrible about taking pictures this week, better luck next time!

Here's what we did this week...

Rose and I had a lot of fun this week. She turned five and has been excited to start "doing school" so we have been dabbling around with Sonlight P 4/5. She loves everything but the handwriting. We may hold off a few months on that, depending how she feels next week. She did the letter F page from Getty-Dubay A. She also did several pages of Get Ready for the Code A which, at least so far, is a lot of fun. This week, in Sonlight Language Arts K we are focusing on the letter F. We read the F page from My First Picture Dictionary, practiced making big and little F's, and identified words that start with F . She did several pages of Singapore Essentials A, because she didn't want to stop. 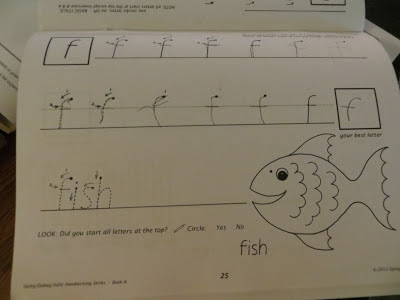 The reading from P 4/5 has been very enjoyable for her. We started The Berenstain Bears Big Book of Science, Uncle Wiggily Stories, Stories From Around the World, Mother Goose, and The Lion Storyteller Bedtime Book. All hits. She doesn't want to stop reading though and is pretty put-out when I tell her I need to work with her sibs too! I am also using Language and Thinking for Young Children with her. This week, we read three fables. For each fable there is a suggested activity that she has enjoyed. After reading "Henny Penny", we discussed the differences between a duck, goose, and turkey. After reading "The Crow & the Pitcher", she tried putting a small amount of water in a jar and adding rocks to make the water rise to the top. Most of all though, she spent a lot of time listening in and playing with her new bday toys:). 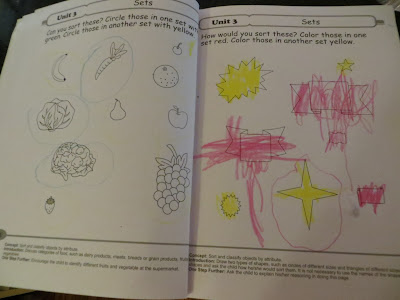 James finished week 10 of Core C and moved on to week 11. He is reading about knights, which greatly excites him. I was scheduled to read A Minstrel in the Tower aloud to him, but he decided it looked easy and wanted to do it himself. He finished it quickly and now I am reading Castle Diary with him, which is a really fun book! He wrote a short paper about our cat and her love for catnip for language arts. He still is not comfortable writing on his own. He dictates to me and then copies what I write.

He started Math Mammoth 3 this week and it has been going well. Right now he is mostly reviewing addition and subtraction strategies. We also read two chapters of Life of Fred: Farming. He continues to read about the human body in The Usborne Book of Knowledge. I don't think it is his favorite topic, though. Not as exciting as reading about space or animals I guess:). He wants to start Latin (mostly so he can play the online games!) but we didn't get to it this week.

Core F is slow going for us. Four days in we were still finishing up Day 1. Once our days get longer though, it should speed up. Right now, our priority is making sure everyone gets outdoor time before it gets too hot, that we have pool time, and that we go out and do fun stuff. It's summer! So lessons will continue, but they will take a backseat to other stuff.

My general idea is that Grace might do this Core in a year, or just a little more, while Christopher will go through more slowly, maybe even taking two years to complete it. Our first read-aloud is Where the Mountain Meets the Moon. The kids read Li Lun: Lad of Courage independently, plus some poems from All the Small Poems.  They are both reading Diary of an Early American Boy for science. Their history readings are mainly from the World Book Encyclopedia CD this year. The reading proved a little difficult for both of them, but I told them to just focus on skimming through for the info they needed to fill in their Eastern Hemisphere notebook page for the day. This week they were assigned to write three facts they learned about China and three basic beliefs of communism. Besides that, we did no writing this week. We started working on Keys to Good Language, just a basic pre-test about punctuation and capitalization rules.

We made our first entry in our new timeline books, which was very exciting (for me anyway!). We began a short review of MCT's Grammar Town, which we completed last fall, just reviewing the parts of speech. I was pretty determined to finish up MCT this year, but looking at the amount of other materials we have, it may not be the best idea.  The kids practiced typing a bit and Grace did some Rosetta Stone Spanish work. Both worked on Latin. Christopher is finishing up Lively Latin I and Grace is working through Latin for Children A. And of course, there was math. I am letting Grace skim through and pick out things from Math Mammoth 6 she thinks she needs more practice on. Christopher is working on Math Mammoth 4 chapter 3.


Fun Stuff: The kids have been walking the goats every day before math. It gives me time to exercise. They went swimming and hiking with friends this week and spent a lot of time poring over the newest issue of their favorite magazine. We are looking forward to a trip to the zoo to cap off the week.

Hope you had a great week!