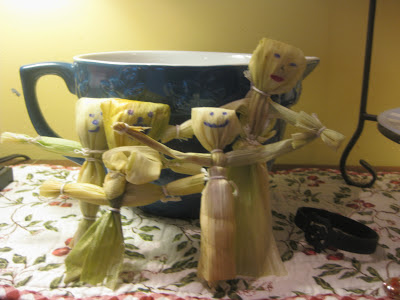 We've had these on our "to-try" list for ages and finally got around to making them. We dried corn husks way back in August when there was still corn around.... boy, do I really  miss corn on the cob, especially on a blustery day like today! So the husks have been sitting around for ages, waiting for me to get my act together;).Ours corn husk dolls are super simple.

First we soaked the dried husks for ten minutes to make them more pliable.

Then we made the heads by folding a husk in half and stuffing it with a cotton ball. We tied string below the head and left the rest of the husk hanging down to form a body.

Next we made arms by folding a husk around a pipecleaner and sliding it up into the body. Then we added a bit more string to tie everything together and to create "pants" or a "dress". Oh, and we went against tradition and drew in faces with a sharpie;).

If you want something "fancier" this is a good tutorial. My kids kind of took off and did their own thing, but they were happy with the results anyway.
Posted by Kim at Wednesday, November 14, 2012