I'm so excited to actually be putting one of these up! I've missed doing it! Links to many of these books are in the sidebar- too lazy right now to link them all up!

Grace learned about plotting points on a map, did some more multivides, and worked lots of word problems. Christopher's lessons mainly involved perimeter, area, and values of money. James reviewed telling time to the hour and half hour and is beginning to learn skip counting. We haven't played as many Rightstart games lately as I'd like to, I need to get better at fitting those in.

The kids did some Benjamin Franklin quotes for copywork- these are great fun! Much less complaining about copywork when it's something fun like "Fish and visitors stink after three days"! Grace and Christopher wrote short papers on Benjamin Franklin, mainly focusing on his inventions.

I am reading Johnny Tremain with the older two and Henry Huggins with James. Johnny Tremain is a bit slow for Christopher's taste, I think, but as long as he gets to help Rose build toy horse arenas out of blocks while he listens, he's good. James and I are really enjoying Henry Huggins, it gets a laugh every time. Rose and I have been reading lots of fairy tales this week. James finished up Viking Adventure and is now reading House on Walenska Street. Christopher is still reading Om-Kas-Toe and Grace is reading George Washington (Famous Childhood Series). 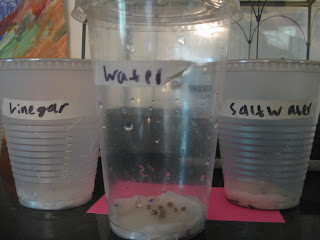 Christopher and Grace are wrapping up their third week with our TOPS kit (radishes). This week they "planted" seeds in fresh water, vinegar, and salt water to see which would sprout (no big surprises there!).

They also attached a seedling upside down on the inside of a cup to see how it would grow and did experiments to show how a plant grows toward light. Lots of good little things going on every day- they are really into this! We have radishes growing everywhere! 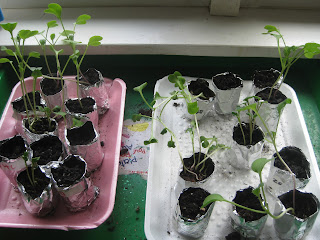 James has been reading from the World of Animals all week and did some experiments on sinking and floating. Basically he just plugged up the bathroom sink and tried some things to see which would sink and which would float.

Christopher and Grace read What's the Big Idea Ben Franklin? and started Can't You Make Them Behave King George? James has been reading all about Egypt in Time Travelers- he spends a lot of time with book every day- it's kind of funny. I give it to him, expecting him to spend ten minutes looking over his assigned page, but half an hour later he's still pouring over the illustrations. Great book!

We started our robin study and hope to finish next week. We read about robins in Handbook of Nature Study and watched some videos. We learned a lot! We've been watching a pair of robins in our front yard, trying to figure out where they are building their nest. We also listened to the robin's song in The Backyard Birdsong Guide (awesome book to have around, but only the western guide seems to be in print right now).

Grace did an Artistic Pursuits lesson involving sketching items found on a nature scavenger hunt. James and Christopher practiced drawing using Make a World. They had a lot of fun with this! 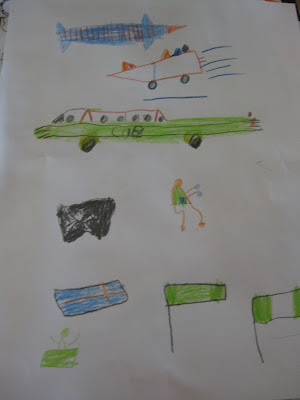 Not much to say this week! Rose spent a lot of time happily playing by herself,  which was a nice change. She has a rocking horse which she spends a lot of time riding, "brushing", "feeding", and "saddling up". She learned to play Candy Land and played a few games of Teddy Bear Mix and Match. And of course, we read a lot of books.
Posted by Kim at Sunday, April 29, 2012