We are on our second week of relaxed learning. There have been a few growing pains, but mostly I am happy with things. I have been keeping a log of what the kids have been doing, mostly to assure myself that they are always learning, even without the worksheets and history lessons-but also because I need to file a year-end report with our school district and I'll need to have something to say!

Everyone did three or four lessons in their various Rightstart levels. I have been debating switching out of Rightstart for next year, because it is so very teacher intensive, and Christopher doesn't seem to do as well with it as Grace has. I played a game of Corners with James.

James did four pages of Spelling Workout A. Grace and Christopher did a page of Latin. Grace wrote a short paper about maple sugaring and Christopher wrote a paper about ocean sunfish. Grace also made a page for her nature journal, inspired by some of the telescope viewing we did this week. Christopher wrote a review of a Lego set to post on Barnes and Noble. Incidentally, I have found that being able to print out
custom writing paper is a huge incentive to get my kids writing. 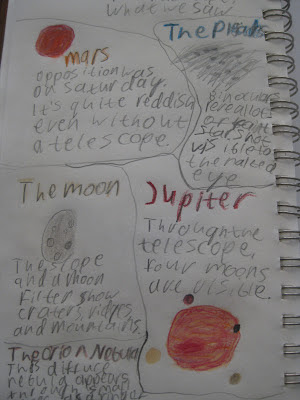 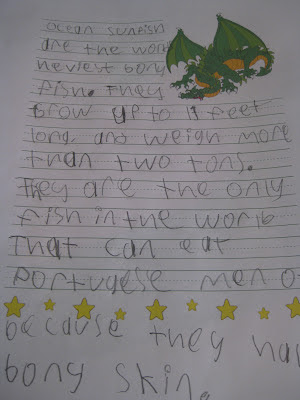 We read a couple more chapters of The Wind in the Willows. This book is proving more and more difficult to get through, but I'm trying to hang in there. The boys get especially antsy when I am not reading about Toad! At bedtime, I have been reading Harry Potter and the Prisoner of Azkaban

with Christopher, and The People of Sparks with James.

We spent some time with our telescope, looking at Mars and the craters of the moon. We boiled more sap to make maple syrup-boy is it a good year for sap! Our buckets are always overflowing. We ate the syrup on our pancakes (the best part). We took a trip to a flower show where we learned to identify some new flowers. Christopher spent some time reading Animal: The Definitive Visual Guide

and various fish books from the library, plus fishing magazines. Grace read astronomy books and magazines and her new horse magazine.  James checked out books about sharks this week and read his fishing magazine and See How It's Made

. The kids also tried out an experiment that was supposed to make a slushy when you surrounded a glass of juice with ice and salt. Sadly, this experiment failed, but we have plans to revise it and try again.

Not much going on here this week I'm afraid! Last Friday though, we spent all day at a living history museum. We watched a blacksmith, visited an old time store, saw how maple trees used to be tapped, explored historic houses, and came home with a kit to make punched tin ornaments. The kids also took part in an old-fashioned donut making workshop. Rose enjoyed looking at all the farm animals, but she tired of the rest
of it pretty quickly!

Grace made herself an eye pillow this week on the sewing machine. She has started sewing a fabric case for her camera. She also made tissue paper flowers, which she plans to feature in our homeschool newsletter. Both James and Christopher spent time coloring pictures of fish they printed off the Internet.

Lots of games-chess, Battleship, Apple Letters, memory,  and checkers. The main fascination for this week has been the Mousetrap

game. James set it up one day and it has been experimented with off and on all week-what needs to be tweaked to make it work, what can be substituted for what while still keeping the game functional..lots of good experimenting going on. And we had a couple really nice weather days so the kids spent a good deal of time outside, mucking around in the mu

d and tracking it all over the floor! The kids did their usual activities (swimming, horseback riding, rock climbing, gymnastics).